Two countries were at war. After a heavy day of fighting, a commando unit was sent out on a night action. They succeeded in surprising and capturing a group of enemy soldiers.

One of the captured soldiers shouted out,

"Don't shoot! I am your fellow countryman!"

The commandos gave the soldier an icy stare. "What does it matter if you were born in our country? You have been fighting against us like the other enemy soldiers. So we will treat you just like the rest of them."

God promised that we should have nothing to fear from the animals. "Fear and dread of you shall be on all the beasts of the earth" (Gen. 9:2). But when people allow their animalistic instincts control them, they become like the beasts. Then they can no longer rely on God's promise.

After Cain killed his brother, he feared that the animals would attack him. "All who find me will kill me!" (Gen. 4:14; Rashi ad loc). Cain's fear was justified, and God agreed to provide him with a special mark of Divine protection. 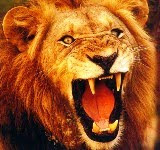 A person might think that he could warn an attacking lion: "Beast, leave me alone! I am a human being and you are commanded to fear me."

But like the commandos in the story, the lion will just reply, "What does it matter that you were born human? You have perverted your humanity and lost your tzelem Elokim. Now you live like an animal. Why should I treat you differently than any other animal?"

For those who live a life of integrity and holiness, however, the Torah promises: "All the nations will see that God's name is called upon you, and they will be in awe of you" (Deut. 28:10).

And in the future, the world will return to the state of Gan Eden, when,


An infant will play over the hole of a snake, and a child will stretch forth his hand over an adder's eye. They shall neither harm nor destroy on all My holy mount, for the land will be full of knowledge of God (Isaiah 11:8-9).