Moses' blessing for the tribe of Zevulun related to their future as successful seafaring merchants.


The Maggid understood the word "sefunei" (literally, 'hidden') to mean "ships." The word for ship in Hebrew is sefinah, since ships must be sealed and impenetrable by water.

But why did Moses bless Zevulun that his ships would be buried in sand? 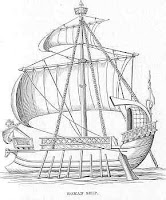 Usually, when ships sail out to sell their merchandise in distant lands, they return laden with goods that are needed in their home country.

But if a ship does not need or does not wish to return with goods, the ship can still not return empty. The sailors need to weigh down the ship with sand and other ballast in order to prevent the ship from being prey to the winds and currents.

Zevulun's blessing was that he would "enjoy the riches of the seas," as his ships would bring the products of Eretz Yisrael to other lands. However, his ships would not return loaded with foreign goods, but would be "buried with sand." The ships would be loaded down with sand and rocks, since the Land of Israel would be so blessed with produce and riches that there would be no need to bring any goods to it.

This 17th century interpretation for Zevulun's blessing may appear peculiar to a modern audience who is accustomed to the concepts of global economy and free markets. But perhaps on a spiritual level we may better understand this idea.

Of all the tribes, due to his profession as a seafaring merchant, Zevulun was most in contact with other peoples and civilizations. While proud of his own heritage, Zevulun may have been duly impressed - and even awed - by the accomplishments of other nation.

Moses' blessing to Zevulun was that, in his travels around the world, he would find nothing of true significance that he would feel the need to bring back home. No culture, no religion, no system of philosophical and ethical truths would strike the merchant as superior to the Torah of Israel.