Behar: The Hen and the Pig


"When your brother becomes impoverished and is unable to support himself in the community, you must come to his aid." (Lev. 25:35)


Once the Maggid of Dubno was collecting for a charitable cause when he paid a visit to a wealthy man - but one with a reputation for being miserly. The rabbi tried appealing to the man's sense of generosity by citing examples of less affluent members of the community who nonetheless donated to the cause.

The wealthy man, however, refused to help. He even explained why he could not contribute. "Rabbi, I will tell you a secret: I have prepared my will, and most of my money will go to charity. So you understand why I am not at liberty to give you anything today."

The Maggid responded by asking, "Do you know the difference between a hen and a pig?"

The wealthy man, surprised by the rabbi's question, just stared.

"A hen is a small animal and does not have much to give. Her eggs are light, weighing only a few ounces, And yet the farmer takes care of her like a baby. Even if she should leave the coup and make a mess in the house, the farmer will not harm her. 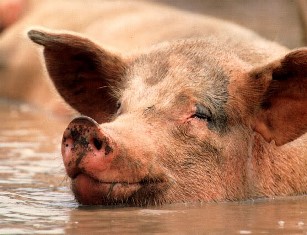 "The pig, on the other hand, is a different story. It is a large animal, providing many pounds of meat and lard. You might think that such an animal is quite valuable. And yet no one is ever nice to the pig. If it escapes its sty, it is driven back with a broomstick. And if the pig dares to enter the farmer's house, it will get a beating it will not soon forget."

"Get to the point, Rabbi," said the man impatiently. "What is the reason for this discrimination?"

"That is exactly what I want to explain," replied the Maggid. "The hen may not have much, but what she gives, she gives graciously each day, as long as she lives. The pig, on the other hand, has much more to offer - but it will only give after its death."

The Maggid turned to the miser. "Now you tell me: which of the two animals is the worthier donor?"