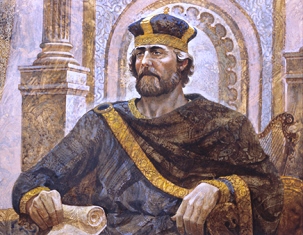 The Torah warns the Jewish king that he should not "raise his heart above his brothers, nor turn aside from the commandment, to the right or to the left" (Deut. 17:20).

How can someone in such a powerful position not be swayed by pride? How can he avoid becoming arrogant and haughty?

A group of merchants were on their way back from the great fair at Leipzig. The merchants had purchased goods on credit, and began travelling home to sell what they had bought.

On the way, one of the wealthier merchants - sitting up high in his fancy carriage, which was loaded with expensive wares of the highest quality - smirked as he spotted a poor merchant struggling with an old and worn-out cart, carrying trinkets and cheap toys.

The poor man could not help but notice the wealthy merchant's condescending look.

"It is true," the pushcart owner remarked, "that your carriage contains fine and expensive merchandise. You would indeed have much cause to be proud - if you had paid for the merchandise.

"But, like me, you bought your merchandise on credit. Your goods may be much more valuable than mine - but your debt is far greater!"

The poor man's observation also holds true for the king, as well as any person in a position of authority and influence. Such favored individuals should remember that if they received more than others, their debt to God is that much greater.

If we are the beneficiaries of gifts of power, wealth, intelligence, and talent, then we have a greater responsibility to use these gifts wisely.

Now we may better understand the verse. The Torah notes that the king's heart will not be haughty and "raised above his brothers" when he does not "turn aside from the commandment." When the king is aware of his special responsibilities and obligations - his unique "commandment" - this sobering thought should help keep his arrogance in check.