Shlach: Taking Care of Our Own Home

Two brothers - orphans - lived in a certain city. They had inherited a large and beautiful house from their father. But since they needed the income, they rented out the large estate, and lived in a much humbler condominium. 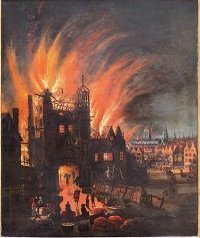 Once a major fire broke out in the city. The brothers worked hard to protect the apartment where they lived from the fire.

A wise man called out to the brothers. "Why are you working so hard to save someone else's house? You would be better off making sure your own house, which is your permanent inheritance, won't go up in smoke!"

Building Up Our House

The lesson for us is clear. We should put our efforts into regaining our own inheritance - in the Land of Israel - and not just work to build up temporary dwellings - Jewish communities in the Diaspora...