God commanded Moses to deliver the following message to the Israelites:

"Therefore, tell the people that I am God.


The Midrash notes that the word "Therefore" (לכן) is the language of an oath. God had promised to redeem the Jewish people from Egyptian slavery.

Why was this oath necessary? And why did God say that He would save the Jewish people using "Four leshonot (expressions) of Redemption"? 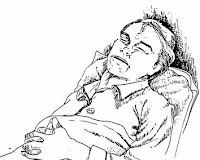 There was once a man with a serious illness, one that caused many health issues. He suffered from headaches, he had trouble sleeping, he lacked a healthy appetite, and his bones often hurt.

The sick man sought out a highly regarded physician, hoping that the doctor would be able to heal him quickly.

Upon examining the patient, however, the physician realized that it was impossible to heal him on the spot. It would take time to cure the man from such a serious illness.

But he did not want to discourage the patient. A wise man, he recognized the contribution of a cheerful and optimistic outlook to the healing process.

Therefore, the doctor told the sick man, "Do not worry, my friend. I will heal you step by step. First I will cure your headaches. Then I will restore your sleeping patterns. Then I will help you recover your appetite, and ease the aching pains in your bones."

Still, the doctor realized that these words might discourage his patient. The poor man might think that he was unable to truly cure him, and could only alleviate some of the side effects of his illness.

Therefore, at the very start, he turned to the patient and said, "I promise you that in time you will be completely cured. And now I will start by helping you with these various health problems."

God announced that He would redeem Israel, using four leshonot or phrases. Why four phrases? Because the Exodus from Egypt could not be a complete redemption of the Jewish people. Rather, it was a partial redemption, rescuing them from many of their immediate problems.

But God did not want the Jewish people to loose faith. So He first promised, "Lachein, tell the people that I am God." This, as the Midrash explains, is the language of an oath.

God said that He would immediately assist the Jewish people, rescuing them from the persecution and slavery of Egypt. But God promised that in time He would fully redeem them, with a complete and permanent redemption.