"Please speak to the people, and let each man request from his [Egyptian] neighbor gold and silver articles. Let every woman make the same request of her neighbors." (Ex. 11:2)


The Midrash notes the unusual language of God's request - "please speak." The Sages explained that God was asking the Jewish people for a favor. Please borrow from the Egyptians gold and silver items, so that Abraham will not complain to Me: "They will subjugate and persecute them" - that part You did; but "afterwards they will leave with great wealth" - that part of the promise You did not keep.

The Maggid of Dubno asked: Was this request only in order to satisfy Abraham? Did not God promise that they would leave with great wealth? In any case, God needed to keep His promise!


The Battle of the Two Warriors

There were two kings who fought against each other for many years. One day they decided that this was a terrible waste of national resources and lives. Instead, each country would choose a champion to represent it, and those two soldiers fight each other. Whichever soldier would win - his king would be victorious and take control of the other kingdom.

Each king chose the best fighter in his kingdom. Then they carved out a deep pit in the ground. The warrior who would succeed in throwing his opponent into the pit - he would be the winner. 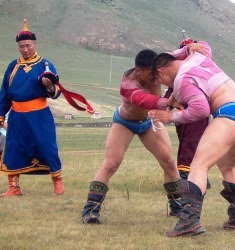 After much anticipation, the great match began. The two warriors started to wrestle, while their respective kings stood at the sidelines to watch the fight. Suddenly one of the warriors succeeded in grabbing the other one. He lifted his opponent into the air and carried him to the edge of the pit!

But just as the two warriors reached the pit, the one held aloft succeeded in overcoming his opponent. He slipped out of his arms and pushed the other warrior into the pit, thus securing the battle - and victory - for his king.

The winning king went over to his champion to congratulate him. He told the fighter: "I will not deny that you are a true champion and you won the battle. Nonetheless, I have a complaint about your behavior in the match. When you allowed your opponent to grab you and lift you up and take you to the edge of the pit, my heart almost stopped. I thought that all was lost, that I had lost the battle and my crown!"

The Midrash says that the riches that the Israelites recovered at the sea from Pharaoh's jewel-decked army were far greater than the wealth that they borrowed from the Egyptians in Egypt. God's promise that "They will leave with great riches" was in fact fulfilled at the Splitting of the Sea.

If that's the case, why did the Jews need to borrow gold and silver from the Egyptians before they left Egypt?

God knew that this promise would be fulfilled later on at the sea. But until then, He didn't want Abraham to be upset and claim that God had not fulfilled His promise that "They will leave with great wealth."