"And he rested the camels outside the city besides the well; it was evening, at the time when women go out to draw water." (Gen. 24:11) 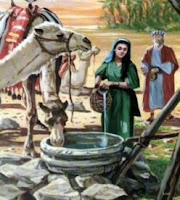 When people travel, they usually prefer to lodge with people who are kind and refined people. But when people are looking for a spouse, they may chose to stay with lower-class people - people who enjoy indulging in gossip and rumors. This way they will be able to hear all the local scandals, controversies and fights. Such information may prove to be important when seeking a spouse.

Kindly hosts, however, rarely speak ill of others, and would not provide the "intelligence" necessary for such a mission.

This explains why Eliezer, Abraham's servant, chose as his first stop in Aram-Naharaim to go to the village well. He knew that the type of people who frequent the well - maidservants, water-drawers, and shepherds - usually include some who love to chitchat and gossip. Such people would be useful sources of information in his search for a good wife for Isaac.

This helps us understood a difficult Midrash. The Midrash states in the name of Rav Huna: "When a man goes to marry a woman and hears the sound of dogs barking, he listens to what they are saying. As it says, 'At the time when women go out to draw water' " (Breishit Rabbah, Chayei Sarah 12).

What does listening to dogs have to do with finding a wife?

Perhaps what Rav Huna meant is that the sound of gossip is like the noise of barking dogs. Normally, a person would avoid such noise. But when searching for a wife, it is permitted to "listen to what they are saying" - not to believe, of course, but to be apprised of situations that should be clarified before marrying into another family.