The Wealthy Man and the Businesswoman

Jonathan loved Sarah and wanted to marry her. But there was a hitch. Sarah ran a small and not particularly profitable business. Jonathan was very wealthy, and was worried that Sarah's business creditors would take advantage of the situation to try to collect their debts from him.

So when Jonathan proposed to Sarah, he stipulated that Sarah close down her business and pay off all obligations before the wedding.

Sarah understood and she agreed. But she warned Jonathan that she had many customers and suppliers, and it would take some time until she finished settling all of her accounts.

Months passed, and Jonathan saw that Sarah still had not settled her debts. On the contrary, she was pushing off creditors and postponing payments. What did Jonathan do? He went to Sarah’s creditors and gave them legal advice how to pressure her into paying promptly.

When Sarah heard what Jonathan was doing, she became very upset. "Whose side are you on? If you act like this now, working against me behind my back, what will you be like after we're married?"

Jonathan replied, "Sarah, do you think I would want to hurt you? Of course not. My intention is only to speed up things so we can be married as soon as possible. I am working in your best interests!"

“I hasten My word to accomplish it” 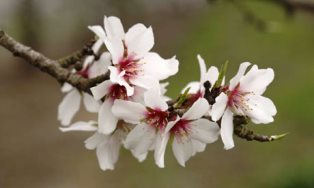 We have a tendency to look at things superficially. We see troubles coming, and we conclude that God wants to punish us. In fact, all of our hardships are only so that we will be purified and ready for the redemption.

The prophet Jeremiah had a prophetic vision of an almond branch. But he failed to understand the meaning of this vision. God explained that the future events – times of misfortune and exile for the Jewish people – would be coming quickly. The almond is one of the first trees to flower in the early spring. That is why its Hebrew name is“shakeid” (‘to hasten’).

The prophet was of course upset by this vision. Why was God doing this to His beloved people?

Like the wealthy groom in the story, God explained that He was working in Israel’s best interests. “I hasten My word to accomplish it” (Jer. 1:12). I am doing this so I may soon bring about the fulfillment of My word – My promise to redeem the Jewish people, to bring them out of exile and return them to their homeland.