The Maggid was once asked: Why do we need two holidays to celebrate the same event? Both Simchat Torah and Shavuot commemorate the Jewish people receiving the Torah at Sinai. Why not combine them into one grand holiday?

The Maggid answered with the following parable:

Once there was a king and queen who were childless for many years. In desperation, they visited a wise old man. The old man gave them a powerful blessing - but with one condition attached. If the child would be a girl, no man must see her until her wedding day, lest she die!

When the queen gave birth to a baby girl, a secluded island was prepared for the princess to live, where she was raised in the finest royal style, but with only female educators and maidservants.

After many years, the princess grew to be a beautiful young woman, ready to be married. The king approached a nobleman whom he respected and suggested that he marry his daughter. "Certainly!" was the enthusiastic response, "When can I meet her?"

The king then explained that his daughter could not be seen before her wedding day. Surprised by this answer, the nobleman declined the match. Perhaps the princess was unpleasant, or ugly, and scarred with some terrible defect.

Time after time, the king was confronted with the same frustrating reaction. "Let me see her first!" the suitors would demand. "If not, then how do I know what I'm getting myself into?" None trusted the king's promise that she was beautiful and kindhearted.

Finally, one brave young man told the king that he was greatly honored by the offer. If the princess shared the noble character of her royal parents, then he would be delighted to marry her - even without seeing her before the wedding day. 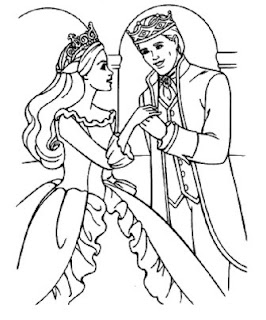 A date was set and the whole world was invited to the celebration. Everyone came to dance and rejoice. A marvelous time was had by all... except the groom!

The bridegroom was overcome with anxiety. He had hidden his fears over not having met his future bride. But during the wedding, the tension showed. Even after the wedding, the groom remained apprehensive. He feared that, although she was clearly beautiful, perhaps some inner ugly trait would surface.

The groom's fears, however, were groundless. The princess was a true gem, a beautiful person inside and out. After several months, he came to appreciate more and more his wife's beauty, charm and wisdom. Each day, another wondrous facet was revealed.

In fact, after a few months, the prince felt disappointed - even cheated - that he had not been able to properly express his joy and happiness at his own wedding. He approached the king and admitted that, although now he was delighted beyond measure, during the wedding he had been filled with turmoil and worry. He had been so worried, his stomach tied in knots, that he had been unable even to eat at the wedding.

The king decided that the only solution was to host a second party for the bride and groom. All the old guests would be invited back to the palace. But this time only one person - the newlywed prince - would dance, to exhibit his pure joy to his wife and friends and family.

The Maggid of Dubno explained that when the Torah was offered to the world, the nations raised many questions about its contents.

The Jewish people, however, were committed to keeping it, even before understanding everything it contained. "Na'aseh veNishma!" "We will observe and we will understand."

We celebrate this unquestioning acceptance of the Torah on Shavuot.

Yet their promise of total trust was incomplete. The mind can know and decide what the heart is not ready to accept. Only after living with Torah - only after completing a yearly cycle of studying the Torah and experiencing its teachings, as "Its ways are pleasant and all its paths are peace" (Proverbs 3:17) - only then is the Jewish people ready, on Simchat Torah, to express their true joy over God's precious gift.