Parashat Yitro: The Prince and the Dancing Bear

There was once a king who was served by an highly talented minister. The king valued the minister's experience and advice, and always consulted with him before making any serious decisions.

The king had a son whom he loved dearly. Since his son was still young, the king did not involve him in affairs of state. Whenever the minister came to the palace for consultations, the king would ask his son to leave as they attended to important matters.

After the minister saw this happen several times, he joked to the other advisers that he was more important to the king than the king's own son.

Unfortunately, the minister's indiscreet words reached the ears of the king's son, who became extremely unhappy. "Could it be that my father prefers the minister over me?" The young boy was so distressed at this thought that he became ill.

The physician who examined the prince realized that the source of his illness was not a physical ailment, but severe psychological depression. He recommended curing him through laughter and jesting. The king immediately brought clowns and musicians to cheer the boy up, but these attempts failed to raise his spirits. The young prince was accustomed to seeing such performances in the palace and quickly tired of their jokes and pranks. 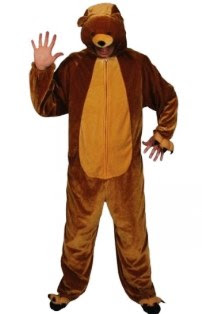 The worried king met with his advisers to see what could be done to help his son. The boy clearly needed some form of entertainment that he had never been seen before. After much thought, the advisers suggested that all of the king's ministers dress up as various animals. The boy would certainly recognize the ministers from court, and seeing these famous and well-respected men cavort and carry on should make the boy laugh.

One by one, the ministers entered the boy’s room to try to make the prince laugh. But despite their best efforts, he appeared as gloomy and down as ever.

Finally it was the turn of the king's most valued minister. As soon as the child saw the dignified and stately minister - dressed as a bear, dancing and waltzing in the palace - he began to shriek with laughter. At last, the young prince was cured of his depression.

One of the advisers grinned at the minister, who had not yet taken off his bear costume.

“Did you really think that you were more important than the king's own son? Now you see, when it was necessary, even you had to dress up like a bear and make a fool of yourself for the boy's sake!”


Moses and the Angels

When Moses went to heaven to receive the Torah, the angels mocked him. "What is a mortal man doing here? Give God's glory to the heavens!"

In response, God made Moses' face look like that of Abraham. God then rebuked the angels: “Aren't you ashamed to treat him this way, after he fed you and took care of you?” (Shabbat 88)

This Midrash is puzzling. What kind of rebuke is this? The angels didn't need Abraham's kindness. After all, angels don’t eat or drink – they only ate out of politeness! Why should they feel that they were in Abraham's debt?

The Maggid explained that when Abraham was upset that he had no guests, God sent three angels to visit him. Even though angels do not eat and drink, God commanded them to dress like men and eat and drink in order to make Abraham happy.

The point was not that the angels should feel indebted, but that they should understand their relative importance. By having Moses' face look like Abraham, God sent a strong message to the angels: they may be important and powerful ministers in the world, but His children are more precious to Him.

We may be feeble, mortal creatures, especially when compared to the mighty forces of nature and the universe. But we are still God's children - "You are children to the Eternal your God" (Deut. 14:1).